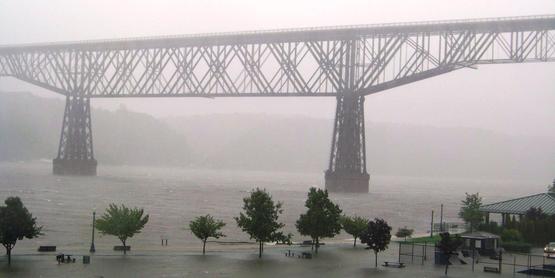 At its core, climate change simply indicates "any significant change in the measures of climate lasting for an extended period of time" (EPA,2016). Global climate change is often spoken of in tandem with global warming, which refers to the recent warming trends in the average temperature of the Earth.

Fact sheets on climate change, written for the general public:

Much like the glass of a greenhouse, the Earth's atmosphere keeps heat contained to a level that allows life to flourish. The atmosphere consists of water vapor, nitrogen, oxygen, and trace gases, which include carbon dioxide, methane, and nitrous oxide. The general warming of the planet is being caused by an increase in these trace gases, often called 'greenhouse gases', which then trap increasing amounts of heat. Less of the infrared heat that is emitted by the Earth is able to pass through the atmosphere when these gases are increased, and instead reflect back, warming the Earth's surface more than usual.

Greenhouse gases are emitted during the burning of fossil fuels (like coal, oil and natural gas). The Environmental Protection Agency has new interactive map showing the facilities that emit a large amount of greenhouse gases.

The changing climate is interfering with natural cycles, causing extreme weather events, raising sea levels as glaciers and ice caps melt, and threatening many species with extinction as their environment changes and the oceans become increasingly acidic.

Check out this interactive coastal vulnerability map from the White House website.

1. Hausfather, Zeke. The Global Climate in Context- 2013 in Review. The Yale Forum on Climate Change and the Media. 3 Feb. 2014. - See more at: http://ccetompkins.org/environment/climate-change#sthash.NUh6LjyV.dpuf

There are no upcoming events